As promised, here are more short bios about the 2012 staff of our Colorado Family Guest Ranch. Since food is always on our minds here at 4UR, we’ll start with an introduction of the kitchen and waitstaff.

Wray Warner (Executive Chef) – Wray works magic in the kitchen of 4UR, as he has in some of the finest resorts on the continent. We are so pleased to have him back again this summer.

Blake Bond (Sous Chef)– Blake graduated from Texas Culinary Academy Le Cordon Bleu in Austin in 2006.  This will be his second summer at 4UR, and we’re thrilled to have him back.

Tesha Brown – Tesha was born and raised in Creede, CO. She is currently studying Culinary Arts at Johnson and Wales University in Denver.  Tesha loves coming back to Creede for the summers because of the great atmosphere and people.

Erin Lynch – Erin is from Columbia, SC.  She is a recent culinary graduate from Johnson & Wales University in Charlotte, NC, and after her summer at 4UR, she plans to explore the world and continue learning about food.

Carla Norton – Carla was raised in kitchens; her mother is a pastry chef and her father is an executive chef.  She was bitten by the travel bug after graduating with a BFA in Illustration from KU, and is pursuing her dream of traveling around the world by bike, boat, and my bootstraps. 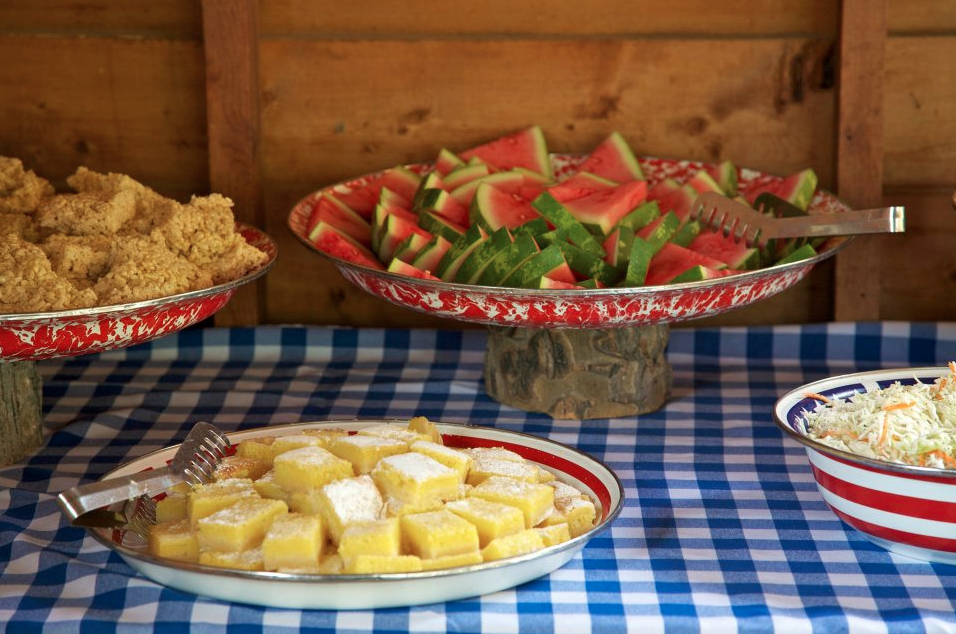 We'd be lost without our food.

Michael Collins – Team Leader – Michael is excited to be back for his second season at 4UR. He has a B.S. in chemistry from Millersville University in Lancaster, PA, and plans to start a Ph.D. program in the fall. This summer, Michael hopes to climb a 14er.

Becky Ford – Team Leader – Becky is also returning for a second summer at 4UR.  She grew up in New Jersey, graduated from Gettysburg College in 2010, and then moved out west and fell in love with the ranch way of life.  She is excited to be back at 4UR, after spending much of this past year working, living, and traveling in the South Island of New Zealand.

Lindsay Gips – Lindsay comes from the downstate region of New York and is thrilled to be spending the summer at the 4UR Ranch.  She recently graduated from the State University of New York College,, where she studied Psychology and Spanish. She looks forward to being outdoors, meeting new people, and spending time around horses.

Nathaniel Linger – Nathaniel is a recent graduate of the University of North Carolina at Chapel Hill, where he studied public health and Spanish.  He enjoys traveling and backpacking, and is passionate about making music. Nathaniel hopes to attend medical school in the future.

Haley Pearson – Haley is originally from Greensboro, NC, and recently graduated from the University of South Carolina.  She plans to return to graduate school to study English literature, and eventually work as a tutor or learning specialist.  She enjoys art, sports, reading, and food–both preparing it and eating it!

Hannah Pepper – At the age of 14, Hannah left the sandy beaches of Lake Michigan for the cornfields of Indiana.  She loves to ski and snowboard–definitely a deciding factor in her college search. She also enjoys reading the classics on her Kindle.  Hannah is looking forward to a summer of hard work and fresh air at the 4UR.

Kallie Simmons – Kallie comes from the little town of Gilbert, Iowa.  She’s a middle child and a junior at Hendrix College, which is a small liberal arts school in Conway, Arkansas.  Her major is sociology and her minor is history.  Kallie enjoys volunteering and cooking in her free time.

Claire Smith – Claire was raise in the Texas Hill Country outside of San Antonio, and has always loved wilderness, adventures, and Colorado.  She spent this past semester in the south of France studying art, learning French, and embracing the French lifestyle.  After graduation, she hopes to work with international relief assistance, with a humanitarian agency, or abroad.

Glendon Thompson – Glendon was born in Evergreen, Colorado, but grew up in Edinburgh, Scotland. He studies mathematical physics at the University of Edinburgh, and his two main passions outside of his studies are basketball and the mountains. He’s played basketball for the Scottish national team and has spent many summers in the Scottish highlands with his family.  This is Glendon’s first season at the 4UR Ranch.

Nikki Carter – Nikki grew up on a farm in Price, UT, and is currently pursuing a degree in Agriculture and Equine Studies at South Utah University.

Emily Dalton – Emily attends Middlebury College in Vermont, where she studies English and American Literature with a focus in creative writing.  She’s on the Middlebury Track and Field team and enjoys running and being outside.  This summer is her first experience working on a ranch, and she is delighted to be sharing it with her sister, Laura.

Laura Tice Dalton – This will be Laura’s second season on the housekeeping staff of 4UR. Born, raised and educated in the beloved woods of New England, she finds it a treat to live in the big country of southwestern Colorado. Since working at 4UR in 2010, Laura has been traveling and hiking and living out of a van in New Zealand. She is thrilled that her sister Emily will be with her this summer at the ranch.

Christine Deal – Christine is from a small town in North Carolina. She’s a sophomore at North Carolina State University, where she is a member of Sigma Kappa Sorority and Phi Psi Textile Fraternity.  She enjoys running, painting, hiking, and being outdoors.

Brianna Gerwitz – Brianna grew up in the small resort town of Ellicottville, NY.  She graduated from Alfred State College in 2011 with a degree in Building Construction, and studied Architectural Technology for two years.  She has rebuilt houses in the ninth ward of New Orleans and worked as a Transportation Construction Inspector with the New York State Department of Transportation. She’s moving over 1700 miles to 4UR, to fulfill her dream of working at a dude ranch..

Rachel Reed – Rachel was born and raised in Levittown, Pennsylvania. She was homeschooled K-12 and spent two years in college. She  hopes her experience at the 4UR Ranch will show her something about herself. She quotes Abraham Lincoln,  “I may walk slowly, but I will never walk backward.”

Kimberly Shoup – Kimberly is from Wayne, PA. She loves the outdoors, being active, and playing sports. This is her first year at 4UR, and she is excited to be a part of such a great team!

Helen Smith – Helen lives on her family ranch near Del Norte, CO, and is a fifth generation native.  She grew up on horseback and has participated in rodeo since she was 8. She also enjoys participating in outreach, worship, and children’s ministries at her local church.  She is currently a sophomore at Adams State College, studying communications.

Megan Throckmorton – Megan is a small town girl from Scottsburg, VA.  She currently lives in Blacksburg and attends Virginia Tech, where she is studying Agriculture Technology. Her favorite things to do are ride horses, play softball, and participate in different FFA events. After college she would like to pursue a career educating others about the importance of agriculture. 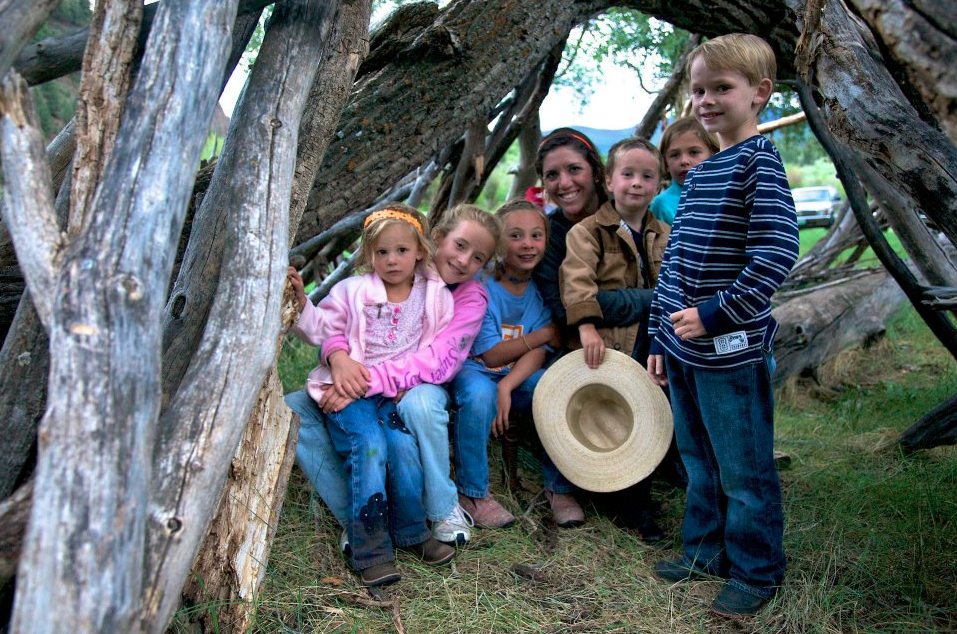 Can you think of a better place for your children?

Zachary Hall – Zachary is from St. Petersburg, FL.  He spent many summers on Virginia’s Appalachian Trail, where he worked with a youth hiking and backpacking ministry. After spending a few months in New Zealand this winter, Zachary is excited to be returning for his second season as a kids’ counselor at the 4UR. He looks forward to seeing returning guests this summer and meeting the new guests.

Christa Millard – Christa is a true California girl, born and raised by the ocean. More than anything, she loves working with children!  Some of her greatest memories are of leading nature walks and craft sessions at her local summer camp, where she was a preschool counselor. Christa brings her love of the outdoors, energy, and experience to the children’s program at 4UR.

Chelsea Heersink – Chelsea will be both a Massage Therapist and a housekeeper this summer. She graduated from the Denver School of Massage Therapy in  2010

Joanne Kaufman – Joanne is experienced in Swedish, Zen Shiatsu, Reiki, Reflexology, Quantum Touch, and Integrative Massage. She has been practicing her calling of Massage Therapy for more than 15 years. Joanne lives in Del Norte with her husband and two young daughters.

Judith Penrose Mattingly – Judith graduated from the Boulder School of Massage Therapy in 1989.  She trained with Bruno Chikly in Lymphatic Drainage in 2000. Judith practices Swedish Massage at 4UR, in her private practice, and at Mineral Hot Springs. She lives with her husband, a retired farmer, in Creede.

Kyle Michaels (Properties Foreman) – Kyle has been keeping 4UR in tip-top shape since 2003, which means he is a jack of all trades. Kyle is married to Kate, who is our housekeeping team leader.

Evan Allen – Ethan is from Tulsa, OK. He’ll graduate from Oklahoma State University in December, 2012, and will commission as an officer and pilot in the United States Air Force after graduation.  He played Division 1 college football at the University of Tulsa, and won the GMAC Bowl in Mobile, AL.  Evan spends most falls and winters duck hunting on the Oklahoma lakes, rivers, and flooded fields, and coyote hunting on the open plains of Oklahoma.

Caleb Gibbons – Born and raised in Worland, WY, Caleb’s been living on ranches and riding horses for most of his life.  This is his second summer at the 4UR; he was a wrangler in 2009.  He loves riding horseback in the mountains, fly fishing, rock climbing, back country skiing, working on  his truck, and pretty much anything outside. He’s really looking forward to seeing familiar faces and meeting those of you he doesn’t already know.