« Experience Ranch Life: Staff Openings at the 4UR
4UR Hockey Team »

Last month, the 4UR family gathered with our neighbors: the Browns, Humphreys managers Joni and Casey Adelman and many Creede friends, to take part in Humphreys Ranch Annual Ice Cutting event. When we arrived, crews had already set to work, sawing away at the ice, hauling it to the stacking crew, followed closely behind by the snow gathering crew. Children ran in and out of cakes of ice, or screamed joyfully as they were pulled in sleds across the frozen lake. 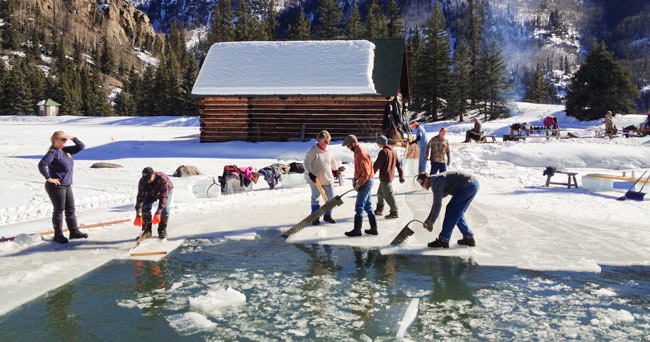 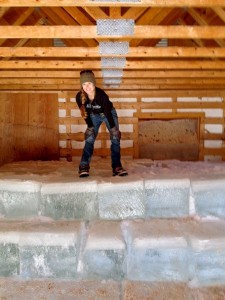 One hundred eighty 20” x 20” cakes of ice, weighing about 200lbs each, were cut from Haypress Lake. Huge, toothy six-foot saws were used to cut the cakes, and large tongs were then applied to pull the ice from the water and to slide it over to the ice shed nearby. The cakes were then stacked and packed in snow, covered with a layer of sawdust at the very end. Joni and Casey Adelman provided delicious food, hot cocoa and coffee throughout the morning. When all the work was done, everyone enjoyed a wonderful lakeside lunch.

I spoke with Bill Dooley to find out the history of this event.  Bill just retired from Humphreys last year, on his 40th anniversary of managing the ranch. He has many fond memories of ice cutting over the years, one of his favorites being the winter of 1974. He was a new, strapping young manager, and he and Boots Brown decided they could handle the job themselves – it was only 180 cakes, right? Two weeks later, along with many sore muscles, they finally got the job done. Another winter Bill was bold enough to take the job on himself, taking a month to cut a few cakes a day and load them into the ice shed. It is VERY tiring work! You can get an idea why they have turned it into a party, calling “all hands on deck”. 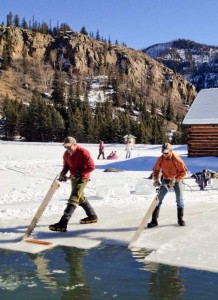 So, why all the work? And what is all this ice for?

The ice was originally cut from Lake Humphreys. The lake was dammed in 1922, and that was the first winter they also put up their own ice. They used it for the iceboxes in their houses and in the lodge. (Yes, this was before the Frigidaire, and Freon!) They still have and use these iceboxes today, along with the modern refrigerator in the lodge and some of the houses. The ice is also put in the “Pop” house close to Lake Humphreys, where they store some perishables and drinks. The rest of the ice is used to keep fish caught off the lake cold, and to transport home after a fishing trip.

Humphreys is one of the few ranches that still harvests ice today. Not so far back in the not so long ago past, all ranches around Creede and in the San Luis Valley put up their own ice. Back in the day, everyone had iceboxes, which needed ice year-round, and the farming communities used the ice to keep produce cool on railroad cars headed to Denver and other destinations. Ice cutting also gave the community farmers and ranchers something to do in the winter. Many called it the “First Harvest” of the year.  Many local ranchers, farmers, and town folk would gather at Broadacres Ranch for ice harvesting.  The ice cakes were stacked up 3’ wide x 6’ tall on skids which were then loaded up on a buckboard truck and driven into town to the local gas station, the Six Gun Camp (now the site of the Creede Baptist Church).  All homes in Creede purchased their ice from the Six Gun. 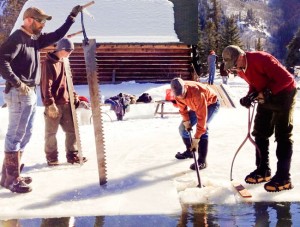 Pulling ice blocks from the lake

• Walton Pond was dammed specifically for ice harvesting. You can still find the old ice shed foundation near the south side of the pond. The ice was harvested to ship cabbage and leafy vegetables that were grown on our neighbor’s land (the Gjellum’s) from the Wagon Wheel Gap Depot (today Davlin’s Wagon Wheel Gap Depot) to Denver.

• Retired manager Ed Wintz was the last person to harvest ice at the 4UR. By this time, ice was only being harvested for the ranch, and the ice was cut from the Hot Springs Reservoir. You pass this pond on the road up to “Breakfast Ride”, and the old ice shed still stands next to the pond as a reminder of our own rich history.

• Staff from the 4UR, along with Creede locals, returned to Humphreys earlier this month to harvest eighteen cakes of ice for the upcoming Cabin Fever Daze festival.  The ice will be sculpted by local artists and displayed along Main Street. Damon & Kiera Gibbons will be carving a sculpture for the 4UR. 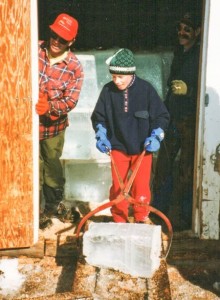 And we leave you with this other “fun fact”:

Q: Who is the boy hauling ice at Humphreys ranch, surrounded by Bill Dooley and Jimmy & Kathy Adelman in this picture?
A: This picture was taken a little over a decade ago. The boy is Ruthie Brown’s son, Simeon “Simi” Hamilton. Simi is now in Russia, a Nordic ski athlete competing in the Olympics for team USA.

(We also include a couple Mineral County Miner newspaper clippings Bill Dooley has held onto: one with the late Mrs. Ruth Brown hauling ice, and polar bear swimming – not too popular a sport, but it is not unknown that a few brave souls have taken the plunge after a morning of harvesting ice, Bill’s son Tad included.) 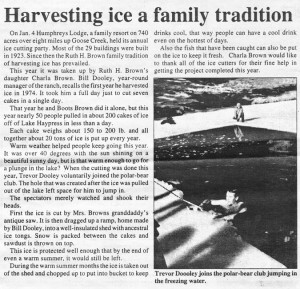 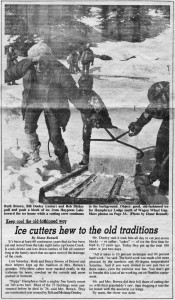