Did you know that the tiny ghost-town of Creede has one of the “top five theater companies” in Colorado? It’s true! We have an amazing Repertory Theater a short drive from the guest ranch in the quaint mining town of Creede.

For the last six years, Creede Repertory Theater was awarded The Denver Post Readers’ Choice Award for “Best Year by a Company.” In 2011 CRT’s former Executive/Artistic Director, Maurice LaMee was named “Theatre Person of the Year” by The Denver Post. And in 2012, CRT received the El Pomar Foundation’s Award for Excellence in Arts and Culture.

The company has a tempting array of performances for you to choose from, including children’s performances and education sessions before the show with company members. 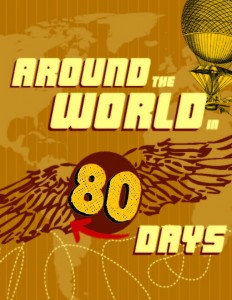 One of this summer’s productions from the Creede Repertory Theater.

This summer’s productions include:

Around the World in 80 Days: Adventurer Phileas Fogg sets out to circle the globe in a miraculous 80 days. The production is a whirlwind show with five actors portraying 39 characters on seven different continents in this wonderful adaptation of Jules Verne’s novel.

The Language of Trees: When an American translator ventures into a Middle East combat zone, an overly friendly neighbor begins to help his wife and son while they come to terms with his absence.

A Funny thing Happened on the Way to the Forum: A classic comedy set in Classical Rome, the plot twists and turns with cases of mistaken identity and infuriated lovers – culminating in one of musical theater’s funnest farces.

The Tamin’ of the Shrew: Shakespeare meets the six-shooter wild west in this knock-down, drag-out battle between Kate and her suitor Petruchio.

William Shakespeare’s Land of the Dead: As a zombie plague rages outside the walls of the Globe Theater, the survivors inside struggle to survive.

See the complete calendar with times and dates for all the shows and other events on the Creede Repertory Theater website.